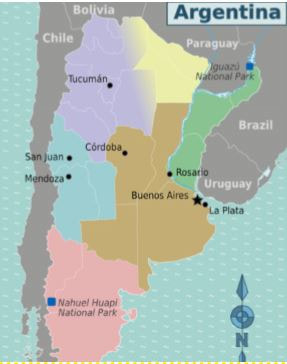 Denise led a GSE team to District 9450.  Her team ranged from 25-38 years old. Argentina has a population of 44 million (double Australia), with the capital Buenos Aries 12 million.  The team was always made to feel most welcome.  The locals were eager to learn and practise English. The team was sponsored by RC of Charlestown, Warners Bay, Singleton & Muswellbrook. Argentinians love their slow cooked BBQ, they love to eat and drink. The team had a very busy schedule including 24 vocational visits and a football match with 25,000 spectators. Only home team supporters are allowed to attend due to the amount of passion displayed by opposing supporters.  85 %  of the population is catholic.  A GSE team from Italy was also there at the same time, but apparently  often complained abut the food.  Our team members had a more pleasant disposition. Rotary Clubs own their own meeting venues and the members are rostered on to cook / cater for the members.  Family life is very important and the extended family often congregate at the weekend. The district has 137 Rotary Clubs and 19 Rotaract Clubs.
40 languages are spoken  in Argentina, mostly Spanish but also include Italian and Arabic. The GSE team saw all aspects of society from the rich to the poverty stricken people. There is no social security, hence people rely on family and friends. Roads are a poor standard, as if driving on corrugate Our Rotary Clubs  seem better organsised as information is disseminated to the participants such as the GSE team.  Businesses start early, have a siesta in the middle of the day, then keep going till about 10 o’clock. Agentinian people are very giving. Law enforcement is an issue but the people are resilient  Translators for the GSE team were often the daughters of the Rotarians. Food was amazing, and lots of it.  They love their sweet foods. Denise presented our Club with several banners from their host clubs from district 9450.  Densie would encourage all Rotarians to put their hand up to be an outbound GSE team leader. Denise was thanked for her most engaging and informative talk by PDG Ted Atchison.